As our girl Lucy prepares to embark on a farking balls-y adult-exchange to the town of Haan to learn more Deutsch, we speak with food blogger and author of Fructopia, Deniz Fıçıcıoğlu, about moving lands to learn a language, foods that make you squeak, and the German pop charts.

USUALLY, WE ASK “WHY DID YOU COME TO BERLIN?” BUT YOU NOW LIVE IN ISTANBUL. WHAT STIRRED THE MOVE?
I lived in Berlin for over six years. I still love Berlin and now that I’ve been away for almost three years, I appreciate life in Germany much more than before, but I’m still not ready to return just yet. I left for several reasons: for one, I believe that life in Berlin is too comfortable. Little money goes a long way, the city offers everything one could wish for, but still people complain. Many people in Berlin lack a certain eagerness to actually change stuff. That somehow bothered me. At the same time, I had this immense “Fernweh” (distant yearning) for Istanbul.

My father is Turkish, but I was born and raised in Germany, without learning his language, which is crazy considering my weird last name. Funny enough my boyfriend and I both wanted to learn Turkish. So we quit our jobs and moved to the Bosphorus. Istanbul is a crazy but magical city. It’s a huge contrast to Berlin. People here are actually struggling to survive. There is a rough vibe on the streets, but Turkish people never fail to amaze! Those crooked smiles or pieces of good advice when you least expect them, go right to the heart.

The city can quickly wear you down, but whenever you’re close the Bosphorus, a certain calmness grabs you. Watching the patient fisherman or ballet of ferries dancing up the Golden Horn, while hearing the cacophony of muezzins calling to prayer, seagulls screeching up above – that’s what makes Istanbul so special.

YOUR BLOG, FRUCTOPIA, FOCUSES ON LOW FODMAP EATING? SAY WHAT?!
That’s short for “Fermentable Oligo-, Di-, Mono-saccharides And Polyols“, or let’s just say it covers all the foods that make you blow up like a balloon, contain hard to digest carbohydrates or high amounts of fruit, milk or alcohol sugars.

Following a low FODMAP diet is usually the only way for people with food intolerances or other digestive disorders such as irritable bowel syndrome to maintain a healthy and balanced diet, while reducing those nasty symptoms such as stomach pain, bloating, nausea, cramps or the D and the C that should not be named. I suffered from most of these symptoms myself until I made the recommended changes to my diet, meaning I had to give up all processed foods, wheat, sugar, onions, beer, most dried fruits, dairy and fruits high in fructose.

It took a while to adjust, but those restrictions only made my cooking more creative. Nowadays I also pay much more attention to what I fuel my body with.

HOW DO YOU MANAGE FOMO ON FOODS YOU CAN’T HAVE?
I sip on large amounts of bulletproof coffees, snack on fresh walnuts until my tongue starts to prickle and remind myself in the mantra-like fashion that I’m the healthiest version of me I’ve ever been. Which is true.

WHAT ARE SOME OF YOUR 2016 FOOD PREDICTIONS? WHAT ARE WE GOING TO OBSESS OVER, WHAT’S GOING TO GET CANNED?
I thought 2015 was going to be the year of all things black like black rice and black sesame. But somehow black tahini or black rice bowls are still an insider’s tip. That is going to change in 2016. Quinoa, on the other hand, is way past its prime. Seriously, is anyone still enjoying those endless streams of quinoa bowls on Instagram?

2016 will mark the rise of millet. It has this smooth touch that calms you down in an instant and sends you back to your childhood. It is incredibly versatile but doesn’t overpower every dish with its taste: Turn it into a creamy porridge in the morning, use in your stir-fry instead of rice or give your salad a filling millet base.

WHEN YOU’RE NOT BLOGGING FOR FRUCTIPIA, YOU ARE…
Reading past issues of Die Zeit (German weekly newspaper) or trying to reduce the number of open tabs in my browser. I’m a knowledge hoarder. I can’t throw away interesting articles or close tabs before I’ve sucked in all the information. The worst thing about it, I’m fascinated by almost everything that crosses my path. Horse breeding, portraits on football players, licorice production in Southern Italy, architectural developments in Mecca… you name it, I read it.

WOULD YOU RATHER FIGHT ONE HORSE-SIZED DUCK OR 100 DUCK-SIZED HORSES? DISCUSS.
I’m a huge Super Mario fan and always on the lookout for the final opponent. I like a challenge, but I’d rather fight 100 duck sized horses. And here’s how I would do it. I’d bring along 100 chipmunks with super powers and cute little red capes and train them to ride the horses. Then I’d send them all out to gather every single berry and nut they can find for my cooking. And if they could grow chunky peanut butter as well, that would be awesome!

IT’S 1999, WHAT’S THE SOUNDTRACK OF YOUR YEAR?
In 1999, I was only sweet 16! My first parties, first flirts, bad skin, bad style… shit I wouldn’t want to swap with my 16-year-old self. I actually had to look up the German Top 100 for that year. I’m a little embarrassed that I still remember most of them like Lou Bega’s “Mambo No.5”, Whitney Houston’s “My Love Is Your Love”, 2 Pac’s “Changes”, or songs by German Hip Hop legends Die Fantastischen Vier and Freundeskreis. “Mit Dir” by Freundeskreis was our summer anthem that year.

SECRET TALENTS?
Breaking things when there is nothing to break.

Thanks for the fun interview, Deniz!

Join us for more food and drink banter on Twitter: @daneegeorgiou & @lucyvstheglobe 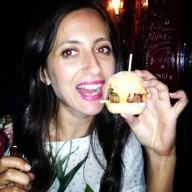